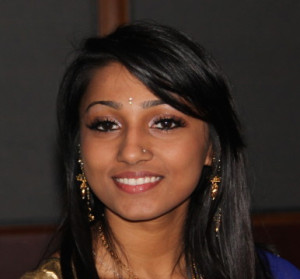 Pranhuti is the younger daughter of Vasanth Suri and Srilatha Suri. Following the footsteps of her mother and sister, she started her training under Srilatha since she was 5 years old. She has won several prizes in her dance programs and is also participated in the Kuchipudi convention (CA) and has a Guinness world record. Pranhuti has been part of her sister’s recitals in India and USA, and also all Natyanjali productions from a very young age. She is fortunate to have blessings of Dr. Padmasri Sobha Naidu and goodwishes from Sri.Padmabhushan Akkinenni Nageswararao, Sri.Jaikishore Mosalikanti, and Sri Pasumarthy Sarma.

Apart from performing at various organization locally, this summer, she traveled to Virginia, Washington DC and New Jersey to perform under Guru Sobha Naidu, as apart of her troupe. She has also coordinated a fundraiser for The Make A Wish Organization, on March 12th 2009, along with major dance schools in Dallas. Currently, she is a 3rd year medical student.